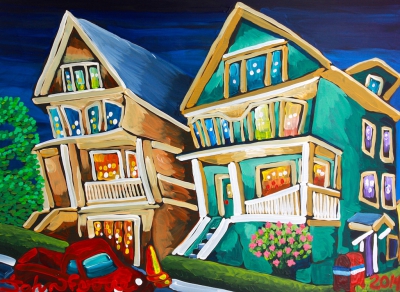 Volume Studio (1209 Bute Street) not just an ordinary hair salon. In addition to Brilliant!, their annual gala in support of mental health and HIV/AIDS at St. Paul’s Hospital, Volume Studio uses their space to showcase local artists from the West End with a portion of all sales going to the ward of the artist’s choice at St. Paul’s Hospital. Just in time for Vancouver Pride, John Ferrie’s “West End Living” makes its vibrant debut at Volume Studio on August 1. Be sure to stop by and check out the exhibit. 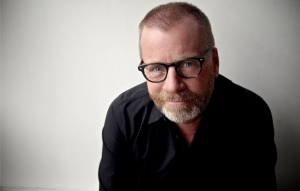 The definition of the “official neighbourhood” of the West End, according to the city of Vancouver, is the area west of Burrard Street, east of Denman Street, and south of West Georgia Street. The West End became Vancouver’s first upscale neighbourhood, home to the richest railroad families.  I have loved the West End for decades.  When I first moved to Vancouver, I lived at Jervis and Pendrell for over 10 years.  When I first lived in the West End, it had the highest prostitution activity in North America.  A group of concerned citizens got together and formed “Shame the John’s” and literally ran the activity out of the neighbourhood in a matter of months.  Since then the West End has flourished and become a very desirable and picturesque neighbourhood.  There are 100’s of character homes in the West End, many of them have been restored or maintained to pristine condition.  Many are Bed and Breakfasts and some have the coveted “Heritage Building” status.

Putting together this collection seemed to happen instantly.  I have always had a love of architecture.  I work at the Teahouse in Stanley Park and I drive through the West End every day.  I always seem to find something new and exciting.  And while I couldn’t draw a straight line, making buildings my own has become the vocabulary of my painting for over a decade.  Starting with a flat black gesso’d canvas a KRink pen draws a shiny black outline of the image.  From there, layers and layers of paint are added, often creaming pigments up by adding white as the subject grows lighter.  The paintings come together with jewel tone expression and pulse with colour to potent effect.

An artist can never impose their work on people to like it or not, people have to decide that for themselves.  My job is to bring my voice forward through my paints and brushes.  Being a painter is an affection, one has to have the strength of working without the thought of gaining any recognition.  It has been a life long commitment and I love what I do. — John Ferrie