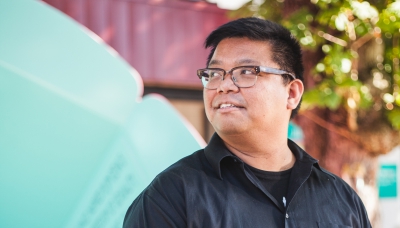 After lengthy consideration and application process, we are thrilled to bring on board artist Wil Aballe to help guide Lumiere 2017!

Wil is the visionary behind Wil Aballe Art Projects, an initiative that showcases local and international artists, notably the innovative younger generation of Vancouver art practitioners. His program is comprised of a series of interdisciplinary, concept-oriented and space-based exhibitions in a variety of media including sculpture, video, sound, painting, printmaking, photography and performance. Its editions program feature contributions by the brightest Canadian artists internationally and are coveted by collectors.

The gallery operates somewhat nomadically, having shifted into 3 distinctly different locations (an open-concept apartment, a spare warehouse, and a unit in a historical building that dates back to gold-rush era Vancouver) since conception and hosting several “off-site projects” as the art demands.

We spoke to Wil about his new role and how he hopes to shine a light on the West End.

How do you see your role as a curator on this project?

I have curated exhibitions over the last five years in various contexts, particularly in my gallery called Wil Aballe Art Projects, also known as WAAP, in Strathcona. I relish the opportunity with Lumiere to curate in public spaces for a broader audience and in a larger scale than what is possible in interior spaces.

I would like to pay particular attention to the relationship of the art to the specific site, so that the end result makes sense to the audience in the best way possible.

What drew you to this role in the first place?

I was drawn to the opportunities but also the challenges of the role. I hope that the process of curating with Lumiere will allow me to work in a different capacity than previously possible with artists locally based in Vancouver, as well as across Canada, possibly internationally.

How would you describe working with light?

The very first show I curated, in 2012, was a renegade pop up exhibition in Yaletown, in a vacated commercial space, with an artist named Nicolas Sassoon. The work, entitled The Green City Between Sky and Sea, was projected onto material applied to the surface of the 23 ft tall windows that faced Richards St. and the effect was like a kind of very large oddly-shaped television screen that can viewed from the street. It was a large scale digital artwork that functioned, in effect, as a piece of illumination that greeted passers-by.

I have since worked with other artists who specifically make illuminated art, yet I’m aware that there is a broader spectrum of this kind of work to explore and I’m looking forward to that opportunity.

Where do you draw inspiration from?

I draw inspiration from everything. Art is all about looking, looking develops taste. The process of curating is really a collaborative one with the artist, but it’s important to feel that you’re bringing some perspectives to the table that is going to make for a strong collaboration.

As a curator, what are you looking for in the artists?

For this particular call, I’m looking for artists who have a strong concept, an idea of why their work has a good context with the fact that it’s for Lumiere.

Lumiere is a West Coast event in December, in the rain likely, so I’m also looking for the technical abilities to carry out their project to completion (our timeframe is short, only 10 weeks long!), and have a vision as to how the work should interact with the site.

Why is this event important to the City of Vancouver?

The City of Vancouver needs more opportunities for the public to come together and celebrate as a community, particularly in the winter when the days are short and we are all deficient of vitamin D. An artistic lighting experience like Lumiere could be just the antidote.

Light festivals have been growing in popularity around the world. Why is the time 'now' for Vancouver?

The time is now for Vancouver because it is a city full of incredible, internationally-important contemporary artists, yet the public lacks the awareness of the great art scene that exists among them. The city currently has a public-oriented events like the Vancouver Mural Festival and Vancouver Biennale, but currently lacks a Nuit Blanche-style event that will get people out and explore art.

What do you hope visitors to the West End will take away from this event?

I hope that visitors to Lumiere find the event engaging, inventive and a wonderful discovery, and that the art paid attention to its context within the West End community, the City of Vancouver and the territories of the Coast Salish People.

I also hope that their Lumiere experience left them with indelible images that would stay with them for a while yet.