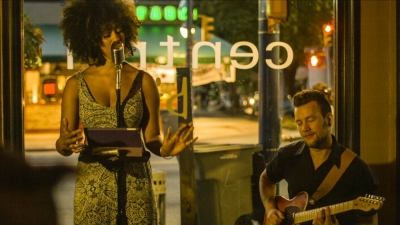 As part of an initiative to connect the West End neighbourhood with their local creative community, Single Line Theatre and local residents have come together to create “Verse & Verve” – a fresh and upbeat showcase of independent musical artists and performers in Vancouver’s West End.

Krystle Dos Santos has taken her experience from the Canadian College of Performing Arts, and transformed it into the beginnings of a career already full of achievements. Unveiling her talents to the public with her 2008 full length self-titled debut, Dos Santos was instantly recognized as a force by the Western Canadian Music Awards, winning the Urban Recording of the Year.

With key performances at the Edmonton International Jazz Festival, Whistler International Film Festival, and the Honey Jam Showcase in Toronto, Krystle has had many opportunities to put her live shows on full display.  She has already toured extensively throughout western Canada, singing stories of pain and love, joy and redemption, all told through a voice that precisely reflects the emotion of her music. It is nearly impossible to be a true fan of Krystle Dos Santos without taking part in the experience she creates with her live performances.