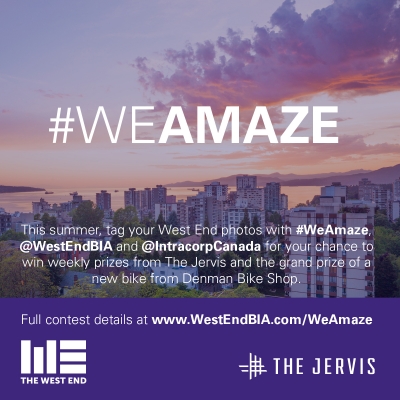 Summer’s back in the West End! And you know what that means… Beaches, sunsets, festivals, fireworks, parks, patios, and pride! After the success of last year’s #WeAmaze Photo Contest, we thought we’d invite you to relive the West End summer magic all over again.

To enter the #WeAmaze Photo Contest, snap a photo of yourself and your friends doing what they love anywhere in the West End (the area of downtown Vancouver west of Burrard) and use #WEAmaze and @WestEndBIA and our co-host @IntracorpCanada in the caption. But don’t just limit your entries to sunset shots. We want you to show us where you hang out when you’re not at the beach too! Help us showcase the energy that makes up the West End’s three great streets. 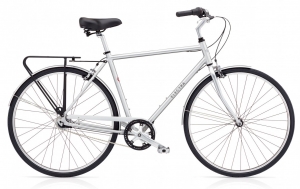 We’ll review the entries each week on Instagram, Twitter and Facebook and our resident West End photographer Caitlin Rowe will select her weekly favourite. This year we’re teaming up with the folks at Intracorp Canada and The Jervis to offer some fantastic weekly prizes. Each of these weekly favourites will be placed into a shortlist for a chance to win a brand new Electra Loft 7i city bike and $100 accessories package ($1000 value) courtesy of Denman Bike Shop.

Why is entering so easy?

Enter as many photos as you’d like. There is no purchase necessary to enter or win the #WEAmaze Photo Contest.

When can I enter the contest? 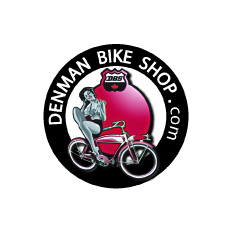 What happens if you win?

If your image is selected, you’ll win the following:

WEEKLY PRIZES: A amazing variety of West End Prize Packs courtesy of the great folks at Intracorp Canada and The Jervis. Winners will be selected Mondays, starting June 29, 2015.

What constitutes a winning pic?

The West End BIA and Intracorp Canada will host a Voting Event in the West End in October 2015 to select the winner based on Caitlin Rowe’s weekly shortlisted photographs. The images with the most votes at the Voting Event will win the Grand Prize. More details on this to be announced in the coming weeks.

How many pics can win?

There are 16 weekly prizes and 1 Grand Prize, so there will be 16 winning photos in total.

When and how are winners announced and contacted?

Winners will be announced at the Voting Event in October 2015. Stay tuned for event details. If they do not respond within 7 days, they automatically forfeit their prize. Winners must provide proof that they are 18 years of age or older to obtain their prize.

How do winners obtain prizes?

All winners will be contacted via social platform through which they entered the contest. Weekly Prizes can be collected directly from the West End BIA, Suite 411 – 1033 Davie Street. The Grand Prize can be collected in person at Denman Bike Shop, 710 Denman Street.

Contest ends September 21, 2015, so get out there and show the world how #WEAmaze!